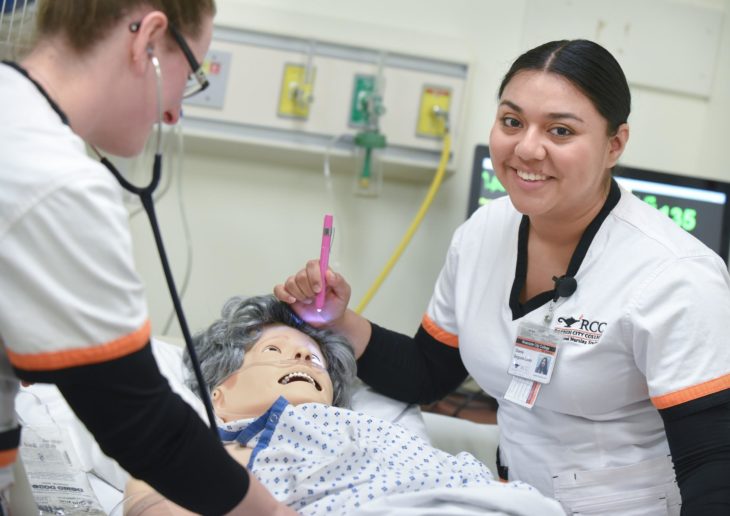 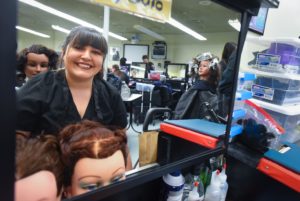 Riverside – August 2018. The hair salon of her dreams has silent shears, neutral smells and a calm and patient staff, so that children with autism might feel safe during a haircut.

“My sister works with children who have autism, and they should have a salon too,” said 21-year-old Nancy Soto, who is studying cosmetology at Riverside City College in a room loud with the buzzing of clippers and the whooshing motors of handheld hair dryers.

Soto started out majoring in microbiology, but switched to cosmetology as a way of getting into the workforce more quickly. She is among 6,500 students at RCC taking classes through the Career and Technical Education program, the kinds of programs that prepare students for specific technical jobs.

A brand new microdermabrasion machine sits right behind her in the facial room, purchased with state money called Strong Workforce. The equipment has a magnifying glass, a steamer, and it has helped RCC bring specialized aesthetics program back into cosmetology. Now students can decide if they want to specialize in hair, or facials, or nails.

Strong Workforce monies also paid for a CTE Engagement Center where all of RCC’s career and technical students can get career advice from peer mentors, apply for financial aid, eat lunch, wait for a class or use a computer. “Now CTE students have a place to come together,” said Bonnie Langley, who is the education advisor for the CTE programs on campus. 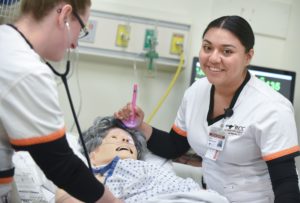 She said Strong Workforce money is helping to make connections between students and jobs, in fields such as nursing, where jobs are plentiful and pay well.

“RCC grads are head and shoulders above every other program,” said Brandon Sumrall, 43, who works as a part-time instructor at RCC’s School of Nursing and also as a nurse in the Emergency Room at Riverside University Health System Medical Center.

He said healthcare jobs are a very safe bet. The aging of the large baby boom generation will make that even more true in coming years. The average annual salary for a Registered Nurse is $68,000 according to the U.S. Department of Labor. 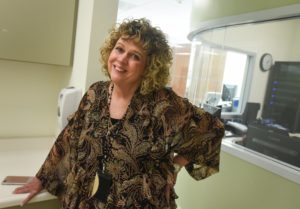 “They all get jobs,” said Dr. Sandra Baker, the dean of the R.C.C. School of Nursing. “If you go to any hospital for 50 miles you will find RCC graduates.”

She used Strong Workforce money to revive a Certified Nursing Assistant program, because it is a prerequisite for the Registered Nurse program. Students were paying $3,000 to a private technical school for the certificate. She wanted to provide a public option.

“They do not have to go to that school for the prerequisite anymore,” Baker said triumphantly. “These are stackable certificates.” Nursing students can start at the bottom and keep going until they find the level they want. 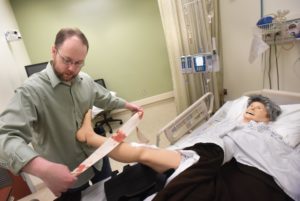 To help create a realistic training scenario for all the nursing students, Baker purchased mannequins that can simulate patients in distress. The illusion is realistic because Isaac Dannelley, a lab specialist, occupies a glass booth nearby providing a voice, a personality, and vital signs.

As a student asks questions, the mannequin talks back, sounding frightened or in pain, irritated or grateful for the care.

“The more extreme the circumstance, the more emotional the student response,” said Dannelley. There can be a sudden downturn in the vital signs and if the students do not respond correctly the patient can die. It’s rare but it has happened,” he said. “It really does bring the students in emotionally.”

Across the RCC campus, another CTE student, 27-year-old Anita Lopez, used American Sign Language to interpret the words of a passionate speaker who was describing the impact of Cesar Chavez and the farmworker movement to a crowd on campus. “Si Se Puede!” he shouted to the crowd, and she echoed that in ASL. Whether he spoke in English or Spanish, Lopez kept up with him. “She’s tri-lingual,” said Diana MacDougall, the longtime faculty leader who supervises the American Sign Language program.

Lopez, who graduated in June after a total of four years at RCC, said she remembers translating for her parents from English to Spanish. Now she will translate for people who are deaf. “I saw how difficult it was for my parents,” she said.

Learning ASL took two years, and then she took additional years learning how to translate for other people. That took just as long as earning a traditional academic college degree, but Lopez argues it might lead more directly to earning a good living. ASL interpreters earn an average of $46,000 per year in the latest U.S. Department of Labor forecast. 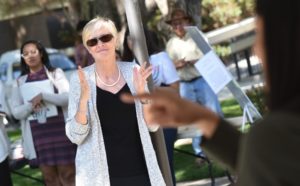 Professor MacDougall, who has been at RCC for 22 years, said she is excited about Strong Workforce money and how it allows her to grow the Sign Language Interpreter program. She hired an assistant to handle the budget as well as a new faculty member to help her double the size of the program this fall. Right now she has waiting lists for every class.

She bought colorful stoles for the graduation robes of her graduating seniors, and banners to take out to recruiting events. She even hired the graphic arts shop at the California School for the Deaf to make the banners.

“Now they tell me they want to be more involved over here,” she said.

That is how outreach to the local community, especially since it includes one of California’s two official Schools for the Deaf, can pay off with new employment opportunities for students. She said when you have money to pay for things, people take notice. In every instance, money talks. “Money signs,” MacDougall laughs.

Strong Workforce money also made it possible for RCC to continue hosting a regional computer programming contest that drew more than 100 teams from Southern California colleges and universities to RCC in November 2017. They take on challenges created by the Association of Computing Machinery.

Teams are ranked based on how quickly and how accurately they can program the solutions, with the top teams going on to statewide, national or even international competition.

A team from the University of Southern California took the top prize in Southern California, but RCC came in 49th, or about the middle of the pack. Given that they are competing with UCLA, Harvey Mudd, Cal Tech, and UC San Diego, their instructor will take it. 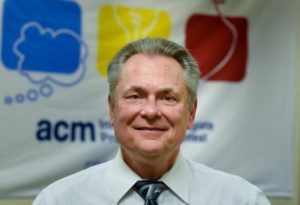 “Our students do extremely well in that competition,” said Mark Lehr, the director of RCC’s “Business Administration and Information Systems Technology” program.

He said RCC has hosted the ACM contest for years, and it inspires his students to greater heights. For instance, the RCC students who took 49th in that competition decided to compete in a NASA sponsored programming contest to design an interface that would help astronauts train in a virtual reality environment. RCC’s proposal was accepted, along with proposals from UC Davis and the Massachusetts Institute of Technology,” Lehr said. “We go to Houston next month to compete in the design challenge. We will find out how well they did between May 20th and May 26.” 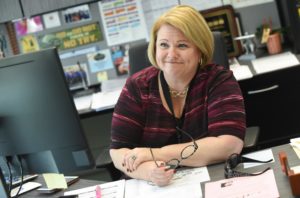 RCC’s CTE Dean Kristine DiMemmo has seen the difference that Strong Workforce makes across the entire spectrum of programs offered at RCC. “We feel incredibly fortunate to be awarded Strong Workforce dollars to improve and expand our CTE programs,” she said. “Every day, we see how these dollars are improving the lives of our students, and it is so exciting!”

A handbook for CTE in the Riverside Community College District

Strong Workforce Program: To develop more workforce opportunity and lift low-wage workers into living-wage jobs, California took a bold step in 2016 to create one million more middle-skill workers. At the recommendation of the California Community College Board of Governors, the Governor and Legislature approved the Strong Workforce Program, adding a new annual recurring investment of over $200 million to spur career technical education (CTE) in the nation’s largest workforce development system of 114 colleges. For more information about Strong Workforce, please visit: http://doingwhatmatters.cccco.edu/StrongWorkforce/Overview.aspx. 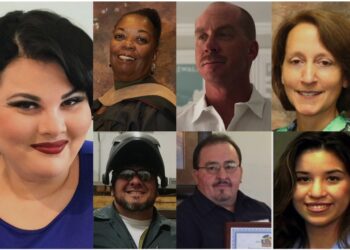 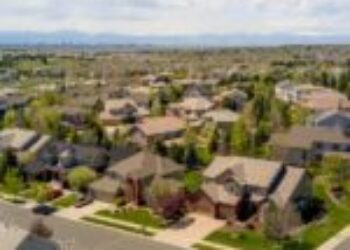 They say it’s always darkest before the dawn. And as the sun sets on a tumultuous 2020, Inland Empire’s economy is beginning to see the light. The year 2021, with… Read More – Inland Rising: Career Education to Play a Vital Role in Workforce Recovery 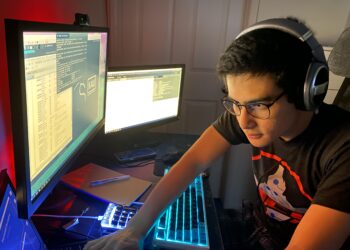