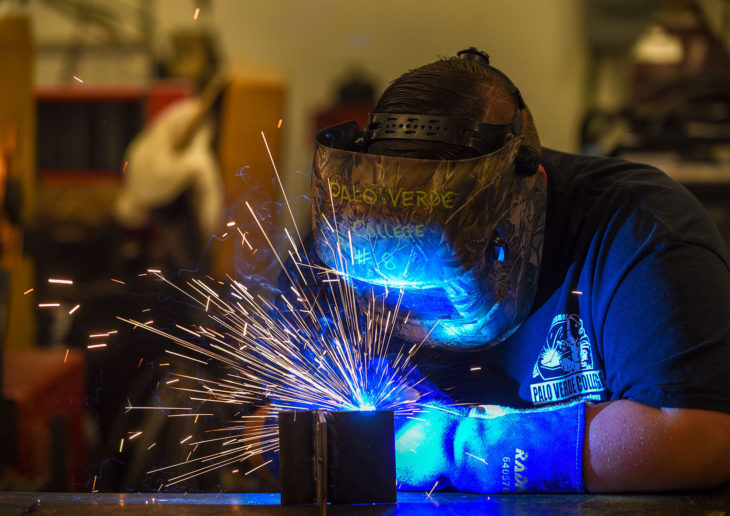 It was in Los Angeles, while he was attached to metal beams on a high rise under construction, that Brian Wilson realized he was not really happy as an ironworker. “When you are 42 stories up it has a way of focusing the mind,” he said.

The job is among the most dangerous and demanding. Plus, Wilson, 45, was tired of living in hotels as he worked on each far-flung project. He checked out his retirement account and it was shrinking rather than growing. So he took a leap of faith. He quit a job that paid $60,000 per year, to go back to school. He enrolled at Palo Verde College in Blythe.

He is a student aid in the welding program. And he is taking classes in geology because his grandfather left him with a passion for gems, crystals and precious metals. In Blythe, he said, he has found his treasure.

According to Biju Raman, Dean of Instruction and Student Services at Palo Verde College, approximately $800,000 per year comes to Palo Verde through Strong Workforce to upgrade equipment and implement programs that fit the needs of the community.

He has only been a dean since July, 2018, after 17 years as a faculty member in math. But he is determined to get the dollars and cents to add up to major changes in the CTE programs. Most recently, he purchased one hybrid and one electric car to be used in the automotive program, so students can work on the latest technology. And Raman hired a full time job placement specialist who works in the college’s Student Success Center. Her goal is to help students find internships and jobs, so there is a smooth transition between classes and the workforce.

After 31 years as a welding instructor, Joe Boire tells his students that it is practice and discipline that is the difference between a job at $20 per hour and one at $60 per hour. Welders, on average, make about $40,000 per year, according to federal statistics. His dream is to see Palo Verde offer students certification from the American Welding Society, the national standard for training that opens doors to the highest paying jobs. Dean Raman says it will happen in about a year. “By the spring of 2020, we will have the certificate,” Raman said.

That could help David Delao, 19, who promised his late grandmother he would go to college. A partnership between Palo Verde College and the K-12 school district means that Delao started welding even in high school, making the clean and smooth welds that his instructor refers to as looking like “a stack of dimes.”

Yakari Araiza, 19, graduated from Palo Verde High School with the dream of following some of her family members into the U.S. Navy. Her recruiter suggested some specialties and she perked up when he said underwater welding. So she decided to take welding classes at Palo Verde College. “How many people can say they are an underwater welder in the Navy?” she asked.

Amanda Henry, 38, is a native of Blythe. She didn’t know she wanted to weld until one of her characters in her unpublished novel needed to hide from the zombie apocalypse inside the cage of his off-road vehicle. After a few welding lessons from her husband, she turned to Palo Verde College’s welding program. And guess what? She’s quite good at welding.

“I will have my associate’s this June,” she said proudly. “Ideally, I’d like to open my own welding business.” She said her husband and her offspring are supportive. In her free time she will use her expertise to imagine the perfect zombie escape. Her book is still on her mind. “I think it could be a trilogy,” she said.

Dean Raman said Strong Workforce funding will help expand other CTE areas. Current enrollment stands at 453, but that does not include a large fire science program that operates in the spring.

He said the automotive program needs to add the national standard certification from the Automotive Society of Excellence and upgrade as the industry moves to self-driving cars. The computer science program will move into bigger space. The nursing program needs to add the Registered Nurse training to the existing Licensed Vocational Nursing program. They have to upgrade programs to meet the needs of the local agricultural industries.

“The technology for agriculture keeps changing,” Raman said. “Now it involves GIS (Geographic Information Systems.) It is a highly specialized industry.” He said all of the programs need more internships for students. The construction program needs more students, and that requires partnerships and advertising.

Cesar Lozoya, a Blythe native who is the faculty member in charge of construction trades, has experience remodeling schools, building custom homes and installing solar panels. He even worked in a gold mine. He said, even so, it has been hard to recruit students to Palo Verde College. He wants to add forklift operation to his program so students can get jobs in the solar panel industry or in warehouses. He is looking to Strong Workforce money to make that happen.

Dean Raman said it is still possible to grow the program. “We are investing in advertising,” he said. “We are working to create a transition from the high school to the college. We have to design a forklift program with him.”

Julie Pehkonen is the chair of the Inland Empire/Desert Regional Consortium. She has seen the hard work and the incremental changes in the programs that create qualified workers in technical fields. She has also noticed how private technical schools spend more money on marketing and the public relations programs need to keep up.

“We still need more students in the pipeline for Career and Technical Education,” she said. She holds meetings at the 12 community colleges in her consortium so faculty members can learn from each other and share best practices.

Former high rise ironworker Brian Wilson has helped spread the word by speaking at high schools about the Palo Verde welding program, a program he would love to teach in some day. When he is not focused on his own studies, he is out finding pieces of quartz, magnetite, blue azurite and opals, his favorite, and making them into jewelry for paying customers. His skill handling metals comes in handy.

“If you are into rocks, Blythe is the place to be,” he said. “I couldn’t ask for anything better.”

Community colleges are the place to be if you are interested in learning a trade. Strong Workforce funding makes it possible to keep up with job trends and equipment. 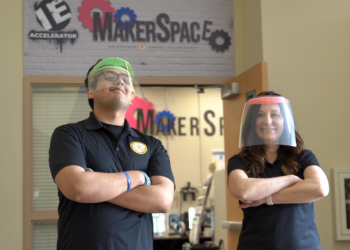 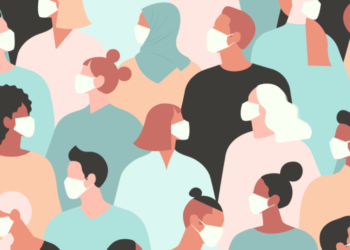 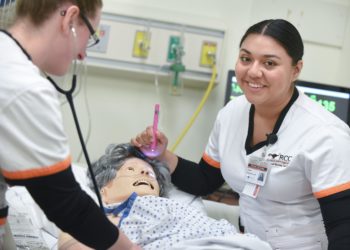